Attempting Rapaki Friday night:
Liam wasn’t feeling well in the afternoon so I headed up to Rapaki by myself. The start was the hardest. I figure this was due to beginning on a hill with just a small warm up of stretching. It was a slow trip up but felt good overall. I stopped a total of three times but they were mainly due to the ends of a cold and not feeling like I had enough breath in me. Unfortunately I didn’t quite make it to the top because it got very dark very quickly. I pushed it to half way up the final slope thinking it’s so close… but in reality I was already struggling to see and I had to get back down as well.

On the way up… 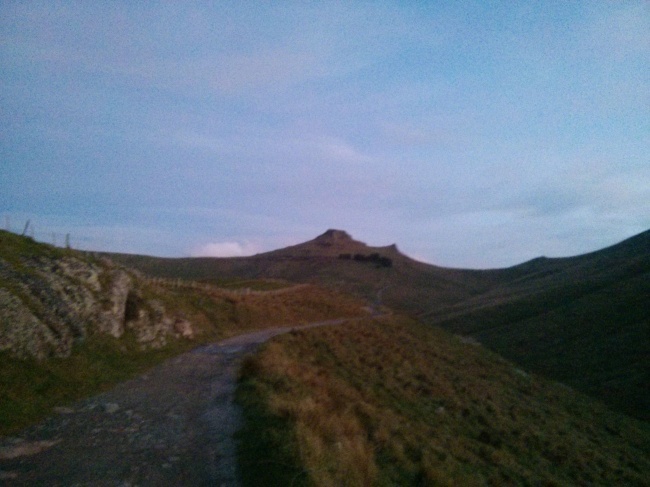 Annnnnd this is about 10mins later… Stupid winter nights… 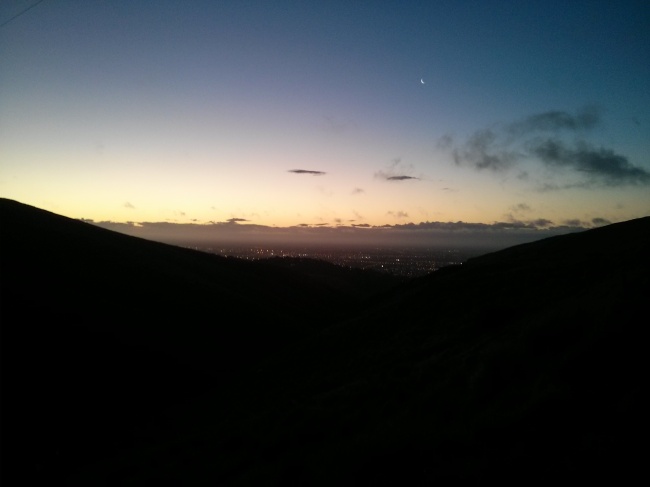 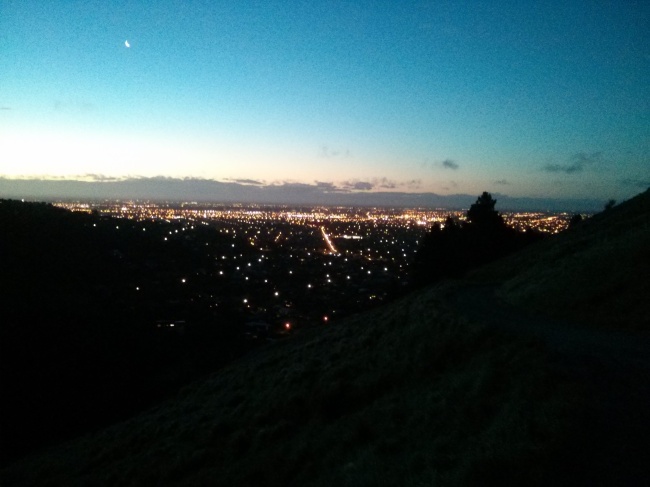 In a nutshell I learnt:
# It wasn’t as scary as I thought it would be
# If I’m going up after work make sure I have a buddy & a head torch so we can go all the way without worrying about safety
# I don’t like being in the middle of nowhere in the dark on my own

Saturday was an early morning. The Boss had organised some extra testing for those who were in the cardio categories (as well as any others who wanted to come along). This started with the Beep Test at the studio. I’ve only ever done this twice before, once at intermediate school (I managed to get out of it every other time at school) and at the beginning of the 100 Day Challenge last year. I think I doubled the time I got last year, I remember stopping at Level 3 and Saturday I got to Level 6. I struggled with the amount of people around me though, there was a bit of bunching which meant you had to push through people to get to the cones – or run past them because people were behind you – however I do like me a challenge! Next we headed to a 400m track in Hansen’s Park to do a 12min run and see how far we could get. I managed bang on 2km, not my fastest but I haven’t been working much on speed lately. Finally we headed to St Martins Stairs for a 12min stair test. This basically meant go up and down as many times as you could. From memory I was headed down on my 5th set when the time ran out. Once we finished that we had a shortened ‘normal’ stairs session which is stairs/reps at the top/stairs/reps etc. A nice warm down run around to road to the coffee shop to finish.

The bottom of the stairs… 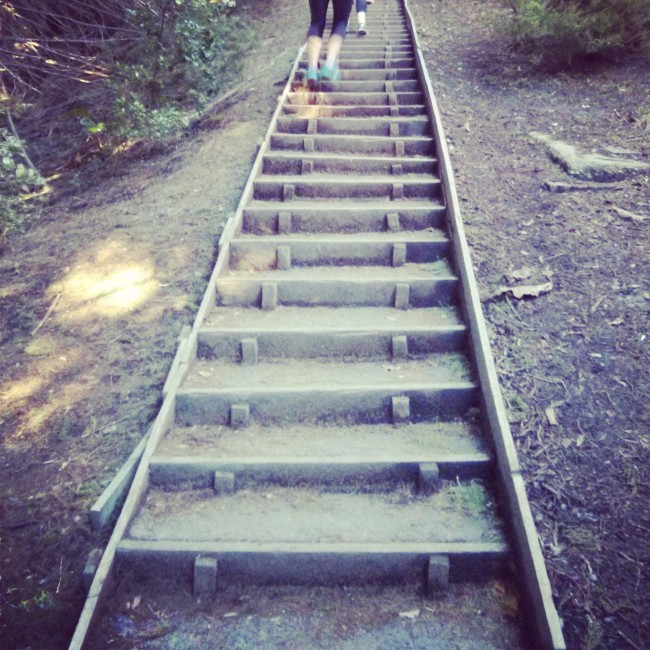 The lovely view at the top of the stairs! 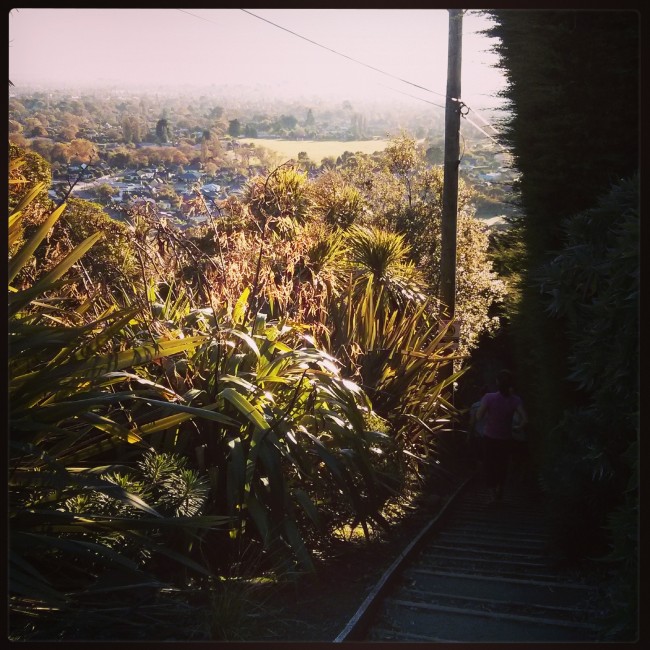 I was feeling good at this point, had a nice coffee and went home to do my reps followed by a 10km ride on the exercycle to tick off some extra km’s. Later on it was off to Dad’s house for Rugby, ‘sushi night’ and a spa (argh I forgot to take a picture!).

Saturday night I kept waking up due to horrible mozzie bites and sore calves. Come Sunday morning I was hobbling around, not impressed. In the end I cancelled my run and was only able to get through some of my reps (burpees/lunges and squats were postponed). I spent a bit of time during the day stretching and wearing my compression socks but I wasn’t able to be much more active than that. I’ve had partially torn calves before – in fact that is what stopped me last year running a half. The feeling I had wasn’t quite as bad as I remember however it was close so I knew I had to rest if I wanted any chance of still running St Clair. It annoyed me because now I’m behind with my km’s and reps and I know I may not get many in during the beginning of this week… But my focus is now on being able to run St Clair on Saturday because if I am unable to do this one I will cry, seriously.

Meanwhile at work today I was sporting a new look; business pants that hid my bright orange compression socks (unless I was sitting!) and some ‘comfy’ shoes that do NOT go with office attire… Apparently I was making a ‘non fashion statement’ HAHA. All in the name of running eh??

Do you run outdoors in the dark?

Have you ever had to pull out of a race due to injury?

Firstly I apologise for seemingly falling off the face of the blog planet… I have been writing a bit but nothing quite got to the ‘published’ state (sigh). IT’S BEEN A MONTH!!!

I managed to roll my ankle at The Color Run because it was pouring with rain and the course was on uneven ground; it got really sore the next day and put me out of action for a little while. Then we had some insane weather, a few days of heavy rain resulted in pretty bad flooding around the city. 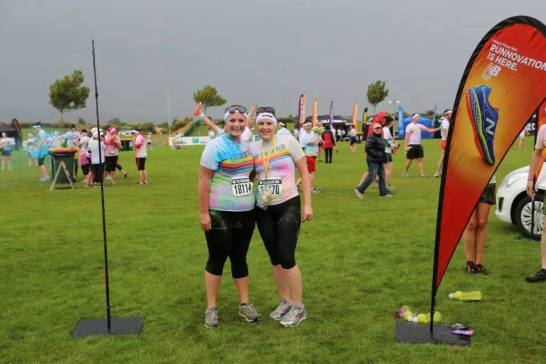 Then a week later we were bracing for another dose of the rain – THANKFULLY it wasn’t as bad as the first round in regards flooding.

BACK TO IT:
Yesterday I completed my third race for the year – City2Surf which was a 14.5km mainly on road race. 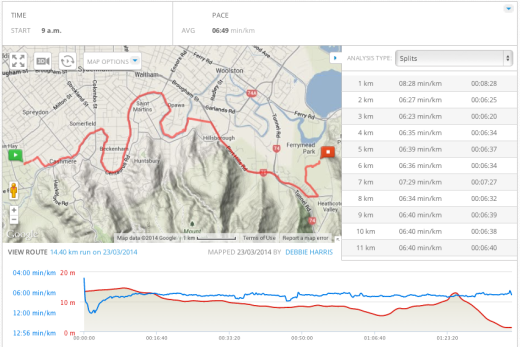 It was cold and windy but I decided rather than having the hassle of dropping off/picking up my gear I’d just suck it up and leave all the gear I wasn’t going to run with in the car… I’ll be honest and say I did regret my decision! Also made me realise I need to get some more layering clothes ready for winter (any excuse for a running gear shopping trip!!). Liam and I arrived at the start after taking the bus from the finish and headed to where some of the Pumped team was meeting up for a quick photo before heading over to the start line. 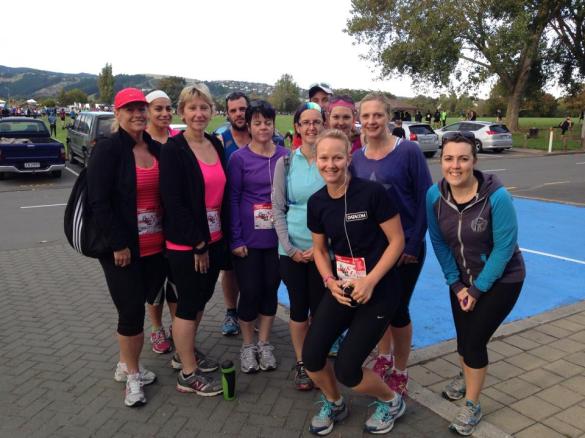 Being the longest distance I’ve run so far in my training I didn’t have a time goal as such. I was hoping to keep it closer to 1hr 35mins. We crossed the finish line at 1hr 38mins so I was pretty happy with that considering we had to stop for a couple of traffic management teams along the way and the first km took ages to actually get running. The start horn went off and it was a good couple of minutes before we got going – so our first km took 8:30!! The rest averaged 6:30-6:40 which is around what I have been doing with my longer runs.

I must admit there were a few infuriating moments during the run. I lined up towards the end of the ‘runners’ section just before the start of the ‘recreational runners’ section but there were SOO many walkers in front of us including some with prams, skateboards or dogs (dogs were strictly prohibited…) that we had to weave around for at least 4km. My goal was to reach the 8.5km mark before 10am (which is normally easy at my pace) as the people who were doing 6km were starting at 10am and I REALLY didn’t want to have to weave through them as well. We hit the 8km mark at 53:57 due to the slow start etc. but it seemed like the walkers set off earlier than expected. There were heaps of them and it made for an even more infuriating time than weaving at the start of our race. They took up the whole road and footpaths and there were lots of runners attempting to get past, in fact by the time we got onto the main road we had to keep going onto the side that was still open for cars just to pass all the walkers. Moral of the story – I need to pick up my pace slightly so I don’t run into them next time ARGH!!

Overall though I’m happy with how I went. There were a few moments I struggled with my head space and I am beginning to realise I will probably need to carry my camelbak with me more often, I’ve found out I like small sips of water fairly regularly as opposed to stopping at the drink stops every 4-5km and I need to start working on fuelling during long runs. This is what I have to test out on my runs so far… 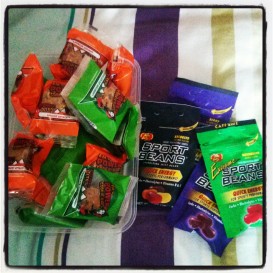 This week I’m focusing on getting back on track with my running schedule, over the last few weeks we’ve missed at least one run (sometimes being the long run eeek) so no excuses this week…

I am saving the homework set by Kate for Wednesday & Thursday mornings. It’s a ‘card game’ as set out below…

I’ve started to realise I’m feeling a little lost when it comes to where I want to head with my Health and fitness goals. For over four years now my goals and dreams were basically to lose weight and attempt to get to a 5km run. My ultimate dream which part of me thought would never happen was to complete a half marathon. This dream is now 7 weeks away and I’m so excited about it!! However because of focusing for so long on it I am now struggling to see what I want beyond that. I know I want to keep going along the fitness lifestyle but for me I seem to need specifics in my head to strive for.

This is where The Boss comes in; we’ve been chatting on and off for the last couple of weeks and what keeps popping up? A Marathon… 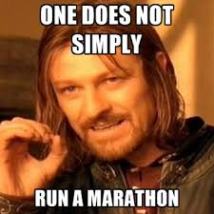 A Marathon?? Now that is a scary thought… Even a month ago if someone had mentioned a marathon (Kate did awhile back – I kind of stopped listening and laughed in my head at the outrageous thought) I would have passed it off not thinking about it. Not so much now. For some reason my mind is now seriously considering this, even though at this point I’ve only run a little over two thirds the distance of the half marathon.

Queenstown International Marathon: This is the one I’m considering, a couple of the Pumped ladies are already working towards this, in fact Emily is blogging about her journey here. It is 35 weeks away which will give me 28 weeks to increase my distances after completing my first Half Marathon. That’s doable… I guess… (eeek)

I’m working on setting goals for other areas of my fitness so there will be more to write about in the coming days/weeks regarding this!

Follow Sweat Eat Run Repeat on WordPress.com
How many times do you think he has watched me make coffee during lockdown?! 😅☕
Having some fun in the leaves

How many times do you think he has watched me make coffee during lockdown?! 😅☕
Having some fun in the leaves